The concept of traumatic stress and PTSD is a relatively new one. Initially called “gross stress reaction” in the DSM after the Second World War to describe symptoms in veterans, it expanded to include other forms of trauma and labeled PTSD in the 1980 DSM-III. In the 1980s and 90s, PTSD symptoms were linked with the survival response of the nervous system, supporting the physiological underpinnings of the PTSD response.

Since then, prolonged exposure therapy and cognitive processing therapy (CPT) have been researched and heavily utilized for trauma treatment. Other approaches also emerged, such as EMDR. SSRIs and other antidepressants have been commonly prescribed as well. In the past 20 years, the understanding of trauma has expanded to include complex trauma, which involves chronic interpersonal trauma exposure, particularly during early development. Judy Herman, M.D. and Bessel van der Kolk, M.D. have been pioneers in expanding the understanding of traumatic stress to include trauma caused interpersonally.

Functional Magnetic Resonance Imaging (fMRI) research has greatly contributed to the understanding of the neurobiology of trauma, and the particular neurophysiological responses including the fight/flight/freeze reaction, sympathetic nervous system and neuroendocrine activation. fMRI studies of the phenomenon of triggering  show that most activation occurs in the older and primitive structures of the mammalian and reptile brain.

Recent developments in trauma treatment include strategies that expand beyond verbally based psychotherapy to approaches that integrate the body into the therapy. Enhanced mind/body approaches to trauma treatment such as Sensorimotor psychotherapy and Somatic Experiencing address implicit memory that evokes trauma-related hypo or hyper-arousal. Van der Kolk and colleagues have investigated other bodily-based and holistic ways to heal trauma, including meditation, yoga, and neurofeedback, among others. This research demonstrates that trauma resides in the body and underscores the need for  comprehensive treatment that includes the physiological symptoms of trauma. In his recent book “The Body Keeps the Score,” van der Kolk explains how symptoms of trauma are adaptive and survival-based, and tend to get wired in the nervous system and “encoded in the viscera.” Traumatic residue in the body may result in  symptoms that are often physical in nature, such as triggering, startling, chronic nervous system over-arousal, and anxiety. Research suggests that the threat system in the brain becomes altered with intense or repeated trauma, including a persistent reactive autonomic nervous system and sensitized endocrine system. Trauma survivors also frequently employ numbing and dissociation, leaving them feeling unsafe and disconnected from their bodies.

“The body keeps the score. If the memory of trauma is encoded in the viscera, in heartbreaking and gut-wrenching emotions, in autoimmune disorders and skeletal/neuromuscular problems, and if mind/brain/viscera communication is the royal road to emotion regulation, this demands a radical shift in our therapeutic assumptions.” (van der Kolk, The Body Keeps the Score, p. 86)

In psychotherapy practice, we frequently encounter patients with  trauma. As psychologists, we have many tools to address emotional pain and traumatic memory, but often do not target the somatic symptoms of trauma directly where they live in the body. As someone who has studied and treated trauma for 30 years and followed the work of Drs. van der Kolk, Herman, and others, I have been intrigued the mind/body approach to treatment. However, despite having been a long-term meditator, mindfulness teacher, and yoga practitioner, I found it challenging to implement these approaches in my traditional psychotherapy practice. I have utilized mindfulness tools and tracking the sensations in the body as a source of information to differentiate thoughts, feelings, and body experiences, as well as explaining ways to invoke the relaxation response. Yet, I remained convinced that there was a wider range of somatic interventions that could further help my trauma patients.

Over the years, I have referred patients to MBSR classes (Mindfulness Based Stress Reduction), local meditation classes, and yoga classes. Unfortunately, my trauma patients did not always benefit from them; some reported that breath meditation created anxiety with the focus on the bodily experience of breathing. Others found that certain yoga poses as well as certain actions of the yoga teachers created discomfort, nervous system reactivity, and sometimes brought on an overwhelming sense of vulnerability.

In his work at the Trauma Center in Boston, Dr. van der Kolk had similar experiences when he began researching yoga as a therapeutic modality. In fact, he had a 50% drop out rate in his initial yoga research because of the discomfort it aroused in trauma survivors. This led to the development of Trauma-sensitive yoga with David Emerson, a yoga teacher, so survivors could benefit from the therapeutic aspects of yoga practice without the “side effects” of a traditionally led yoga class. Patients at the Trauma Center were referred to yoga classes on site in addition to their therapy visits. 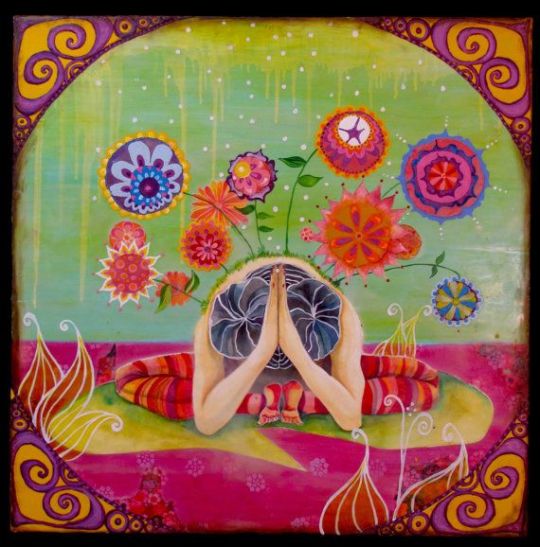 The principles of Trauma-Sensitive Yoga include not using certain poses that evoke a sense of vulnerability, no adjustments by the teacher, never walking behind students in class, no “commands” or instructions to push endurance, and avoiding certain props. The goal was to create a safe environment that fostered choice and control while allowing survivors to safely connect to their bodies, breathing with movement and quieting the overactive nervous system. David Emerson has documented this refined approach in several publications, and also offers online and in-person training.

Armed with my knowledge of the mind/body research on trauma and available somatic interventions, I developed a carefully choreographed six-week course (currently named Mindfulness Yoga for Trauma) that could be adjunctive to psychotherapy. This course combines didactic information about the science behind  the neurobiology of trauma and related topics, with teaching mindfulness and somatic practices, such as Trauma-Sensitive Yoga.

Science and research can drive acceptance and understanding, creating more motivation to use and try mindfulness and yoga practices. Learning and understanding the mechanisms of trauma and what can be done to alleviate symptoms empowers the participant to take charge of their own healing at their own pace. It also has the possibility to “de-shame,” since gaining understanding that the symptoms of traumatic stress are not cognitive, but survival-oriented and originate in more primitive brain structures in our brain. In other words, you cannot “out-think” it; it is an automatic survival mechanism.

The Mindfulness Yoga for Trauma course emphasizes tools for calming, grounding and self-regulation, and no expectation of self-disclosure. It is made clear that it is not a therapy group, but a safe space to learn with the implicit knowledge that everyone present has a trauma history. This course has been taught three times over the course of the last year.

Each of the six weeks is focused on a different topic, and comprises an hour of presentation and an hour of mindfulness training and trauma-sensitive yoga practice. Some topics are didactic only, such as the neurobiology of trauma, polyvagal theory, and how trauma resides in the body. Other topics covered are commonly employed strategies in trauma treatment, such as how to use grounding both cognitively and physically to anchor and establish safety, physical and emotional self-regulation, self-compassion, and post-traumatic growth and resilience. Each topic is followed by a mindfulness exercise or training. The exercises are geared toward observation of sensations without judgment and tracking sensation and emotion to interrupt automatic reactions. This cultivates self-awareness and makes space for self-observation, noticing and befriending what is experienced to reduce the stress response. For those who have disconnected or dissociated, it allows safe reconnection. For those who are physically reactive with triggering and hyper-arousal, it promotes pausing and noticing what is being experienced and eventually interrupting the stress response. Directing attention to the present moment has been proven to increase ability to gain perspective and regulate responses. Resources such as books and webcasts are provided in the handouts. The second hour of each class is a guided yoga session of slow, gentle poses and breathing using the principles of trauma-sensitive yoga. Participants are encouraged to practice mindful awareness while practicing yoga, and to go at a pace that is right for them. They are also encouraged to use grounding if anything becomes triggering and uncomfortable.

At the end of the course, participants are are asked to complete a confidential feedback form.  The following are some abbreviated comments that we have received over the last year:

The overall goal of Mindfulness for Trauma is to equip participants with tools and information, heightening perceptivity in the mind/body connection and how trauma impacts functioning. Participants learn to comfortably practice mindfulness and yoga exercises on their own without being triggered or having to look for appropriate yoga classes or  courses like MBSR, or MSC (Mindful Self Compassion). This increases understanding, self-awareness and increased capacity to pause, observe and reduce reactivity as well as promotes self-compassion, becoming more present without fear and, of course, reducing symptoms.

Dr. Sterling has been in private practice for over 27 years, and a mindfulness consultant for Scripps Center for Executive Health for the last decade. She also volunteers to treat military vets as part of the Give An Hour program and is a long term meditator and yoga practitioner.